It was a tough day at the office last week for Mike Dean. The match was Manchester United vs West Ham and after 15 minutes he dismissed Feghouli for a foul tackle. The tempo of the game changed. West Ham were on the back foot and eventually conceded two goals to Man Utd. Undeniably the red card had a big effect on the outcome of the game. It has since been rescinded, showing that the FA agree with fans that perhaps it should not have been a red card.

There has also been a tweet circulating that Mike Dean in his last 7 Tottenham games has sent off three opposition players. On first reading this raises some eyebrows. Is this just a statistical oddity or is there something deeper in the numbers? A prime opportunity to explore our RefRadar of Mike Dean and see how he compares to the other Premier League referees.

So as we can see here, Mike Dean does like penalising the away team more than the home team for both fouls and yellow cards. Obviously these two stats are going to be correlated. But it is still interesting to see how he is fairly close to the average amount for penalising the home team, but for the away team he is frequently giving fouls and yellow cards out.

Mike Dean has officiated the 5th most amount of games in the league. So let’s look at the 3 other referees who have had more games. 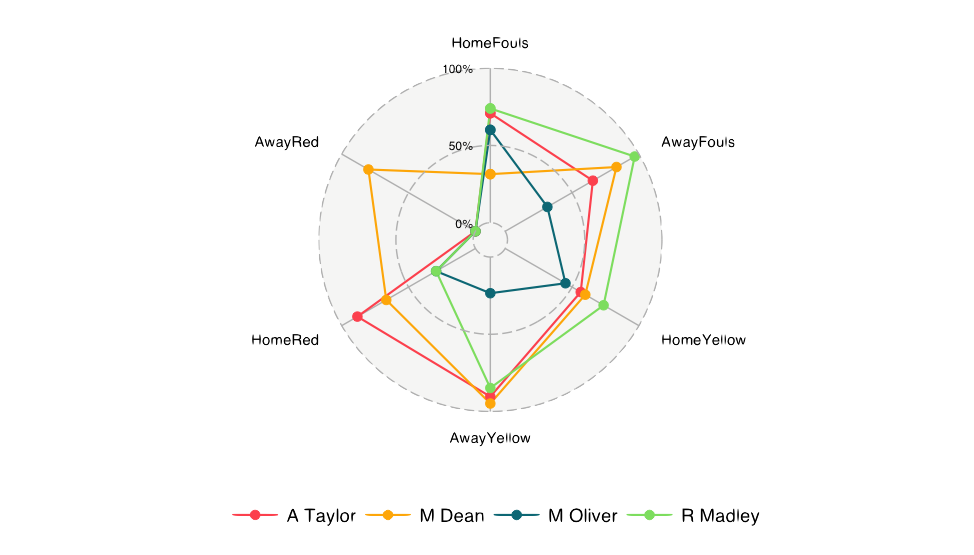 Most notably, three out of four of the most active referees this season are the ones giving the most yellow cards to the away teams whereas they are middle of the pack for the home yellow cards. A similar trend is seen for the away fouls, but like previous, these two variables are going to be highly correlated. The stand out statistic though is Mike Deans average away red cards. He is a clearly the most likely to send off a player of the away team out of this selection of referees. In fact the three other referees haven’t sent anyone off from the away team yet this season! But something to keep in mind is that this is a really small sample size. The season is about half way through so there is still plenty of time for the other referees to catch up on the red cards.

So in conclusion, whatever match Mike Dean is appointed to next, the away team should keep in my mind a red card is never far away. But perhaps the FA are going to have a word with Mike Dean and he will have an easy couple of games to bring his average down. The RefRadar here has been useful to look at how active the officials have been compared to their peers. Lets see what the next round of football brings!