The news has just broken that Premier League referee Mark Clattenburg is moving to Saudi Arabia. Having refereed the FA Cup final, Champions League Final and Euro final last year alone he can quite comfortably say he has done it all. As they say, you are only as good as the last game you refereed, so perhaps moving somewhere less visible is a good end to an exemplary career. 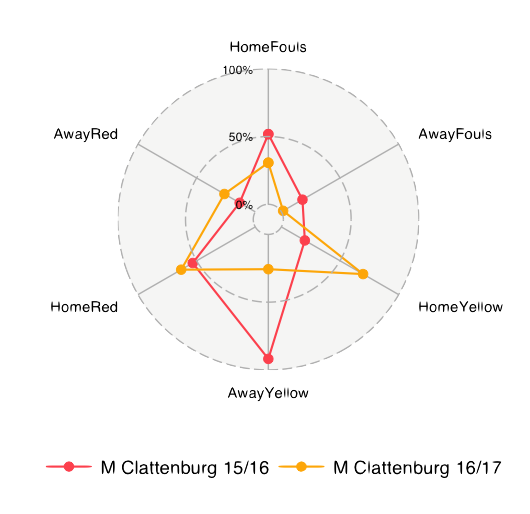 Across both seasons (or season and a half) he has been consistent in the number of red cards for both home and away. The same with his foul counts. Quite a large difference in the amount of yellow cards though, the only thing that is different between the two seasons.

A good comparison can be made between Clattenburg and Howard Webb in their ‘peak’ years. Howard Webb refereed the World Cup Final and Champions League final in the 2009/10 season (missing out on the FA Cup final to Chris Foy). 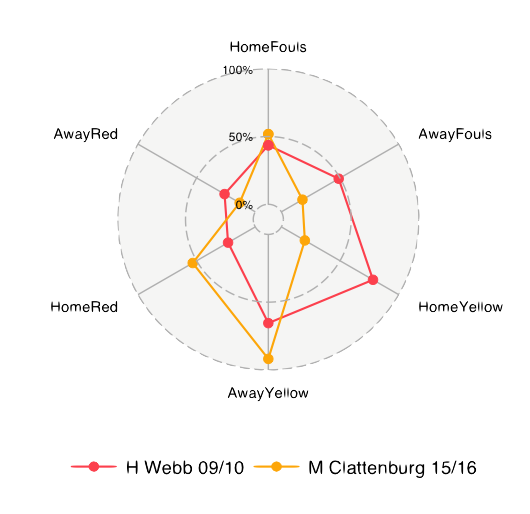 Webb was average for fouls throughout that season but more active with the yellow cards and under active with the red cards. Overall it is quite the rounded radar, nothing really striking out. Whereas Clattenburg’s with the high amount of away yellow cards is a bit more jagged. The difference in shapes between the two referees gives an indication of the different styles and personalities of the referees.

Overall, the Premier League will be missing out on a good referee, but it is probably a sensible decision for Mark to take, he’s reached the top, time to take some of the rewards.