In an older blog post I looked at how fitting Bayesian GAM’s are a piece of cake using rstanarm. I needed an excuse to explore hierarchical models, so using this post as a way of showing you how you can fit and explore such models using rstanarm.

I’ve chosen to apply a hierarchical model to the number of yellow cards in English football matches. Using only the referee on the game as the predictor I will show how we can use hierarchical pooling to get a better idea of how a referee can affect the number of cards in a game.

We will be making use of a number of popular packages.

Using the data from http://www.football-data.co.uk/ we select all the English games from the 2015/16 season onwards. Why? The names of the referees are most consistent from this point onwards. Using older seasons would have meant too much data cleaning for this humble post.

We are left with 6636 observations. More than enough to get started.

We plot some exploratory graphs to get a feel for the data. 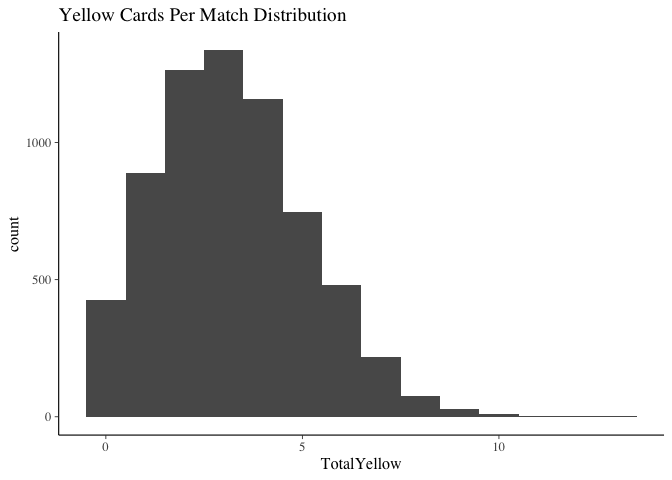 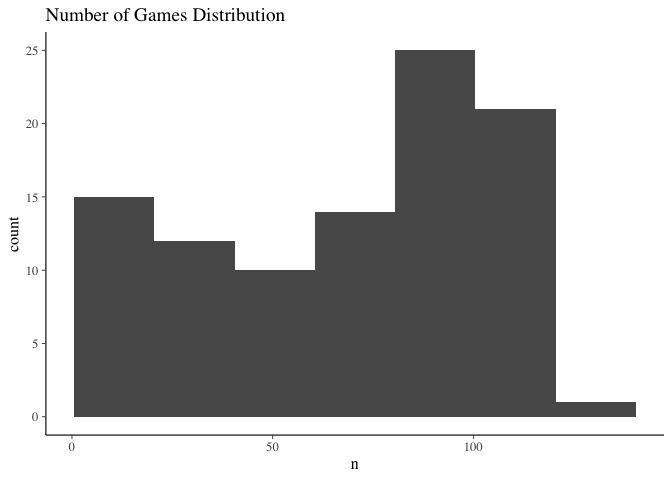 The total number of yellow cards per match is has no cause for concern. A Poisson model will suit us just fine for the glm.

The total number of games though is more interesting. There is a large variation in the number of games that each referee has officiated to date. 15 referees have done less that 20, whereas there is also about 25 referees that have officiated 100+ games, the veterans of the game. When we use a hierarchical model we are able to use the information of the veteran referees to help us lear, the parameters of the less experienced refs. This is the key point of hierarchical modelling - the pooling of information.

Using rstanarm we fit two models, one where there referee is a free parameter and one where it is a hierarchical parameter. This is very simple to forumlate using the R model syntax.

The code (1|Referee) indicates that we are imposing a hierarchy of the referee parameter.

where each referee has a parameter \(\beta_i\) that is drawn from some normal distribution. For referees with little information, we expect their \(\beta _ i \approx 0\). Referees that have a parameter that fall outside the normal range of the prior distribution could indicate that they have a large effect on the number of cards in the game.

After fitting the model without a hierarchy, rstanarm is alerting us that the chains have not converged, which would be an issue if we intended to analyse the results of such a model. As we are just using it as a comparison tool, this lack of convergence is not of major concern.

We collect the coefficients of the models into data frames. At the minute we will just be using the posterior means from both models. 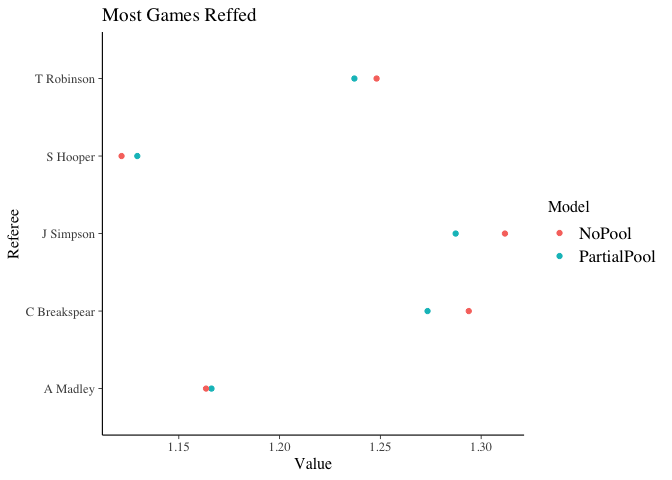 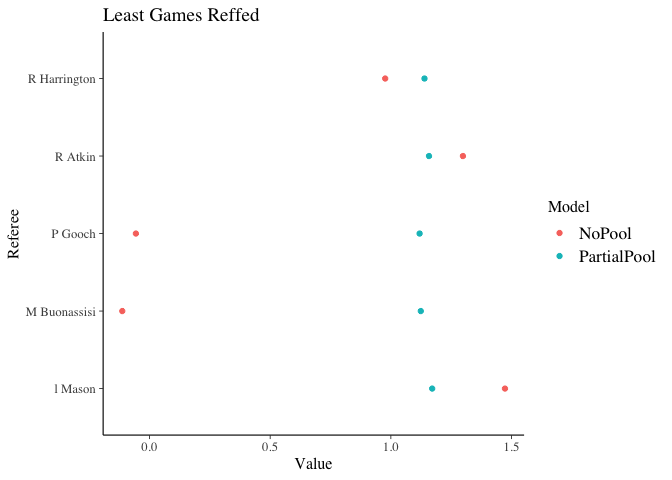 Here we can see that those that have not reffed many games have a major shift in their rate for the partially pooled model as expected. Whereas those that have officiated the most games see little impact in their parameter.

This highlights the power of pooling. Using all the information we are able to better understand the impact of a referee, with less sensitivity on the number of games they have refereed.

Are they are any referees that are significantly different from the mean? By this, we want to investigate what referees have a coefficient that falls outside the common distribution.

From the model we know that each referee parameter is distributed as \(\beta _i \sim N(0, \sigma ^2)\) therefore, if a referee’s parameter falls outside a range defined by \(\sigma\) we can conclude that they are having an above average impact on the number of yellow cards in the game. This time we will be using the full posterior samples of the referee parameters.

We now want to find all the referees that have parameter samples significantly outside the the distribution range. In this case we will borrow from physics and say that if the interquartile range is further than \(5\sigma\) away from 0, then this is evidence that the referee changes the number of yellow cards in a game.

This post has shown how a hierarchical model can be easily fitted using the rstanarm package. I’ve applied it to the number of yellow cards in a football match and found that there ar ea number of referees who differ from the group average. The hierarchical model has been useful in this case, as there are a wide number of games that different referees have officiated. By pooling this information, the referees with fewer games have been pulled towards the group mean and those with more games are less effected by the pooling. Overall, its been a good exercise to understand the benefits of a Bayesian approach.